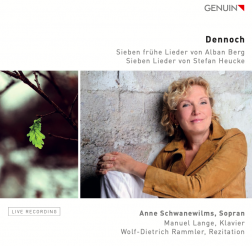 A live recording of a concert in Leipzig with Anne Schwanewilms, pianist Manuel Lange and actor Wolf-Dietrich Rammler will be released on CD by GENUIN on 5 January 2023. The program of the recital included the “Sieben frühe Lieder” by Alban Berg, recitations of texts by Hilde Domin and the song cycle “Dennoch” by composer Stefan Heucke. “Dennoch” is based on poems by Hilde Domin, the song cycle is now being released as a world premiere recording. A humanitarian appeal from great poetry and moving music!